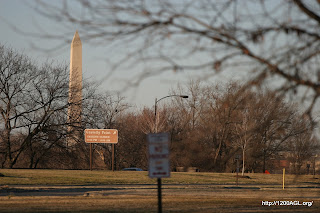 On 19 February, the surface winds were gusting over 45 knots. After hearing a couple of go-arounds on the radio, I decided to head out to Gravelly Point Park at the end of runway 1/19 at National Airport (KDCA) to watch the professionals handle the conditions.

Due to the strength of the northwest wind, most aircraft were circling to land on runway 33, so the view wasn't as good as with runway 1. Years ago, I visited the park when runway 19 was active. It appeared that the jets on final approach were going to fly right into us, and after they passed overhead I would feel a tiny residue of the jet blast and smell Jet-A. Highly recommended. There is a sign banning kite flying in the park.

A little while later, the wind abated and more aircraft began to use runway 1. I shot the following video--nothing terribly exciting, but best watched at 1080p fullscreen--of two takeoffs and a landing. Sorry for the shaky camera work (the wind was cold).

Email ThisBlogThis!Share to TwitterShare to FacebookShare to Pinterest
Labels: aviation