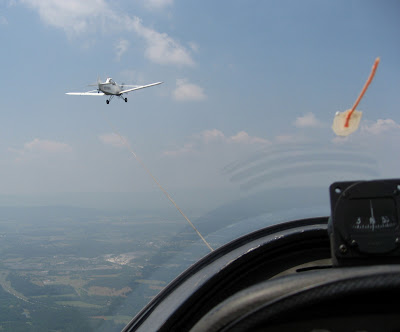 I passed the written test for the Bronze badge on Wednesday. And yesterday, I completed the required spot landings in the Schweizer 1-36 using the grass next to the runway. This badge is one of my club's prerequisites to be endorsed to make cross-country flights.

Flying cross-country in a glider requires venturing outside of safe gliding distance from the home airport. The goal is to fly a predetermined course as quickly as possible. I'm finding that to be challenging and strong motivation to improve my skills.

While the spot landings were judged to be within specifications, I was disappointed with one of them. After releasing from tow at 800' AGL on the downwind leg, I flew an extremely tight and steep pattern to really beat the Pawnee down: full spoilers and a full rudder slip all the way around; the Sprite descends like a helicopter when you do that. I let the nose drop a tiny bit in the slip and when I kicked it out low to the ground, I had more energy than I wanted. The glider sailed past my desired touchdown point. I learned my lesson: don't be a hotshot.

The only requirement left for the badge is to complete two simulated off-field landings without reference to an altimeter.

It's been a while! Though I've certainly been neglecting this journal, I have been flying quite a bit lately.

On Friday, I had my first solo mountain wave flight in the Open Cirrus. Early on, I was scratching to stay aloft in narrow bubbles of lift. I got as low as 2,300 feet above the airport, prompting the Forest Service helicopter to ask if I was going to land soon. Conditions soon changed and I found good thermals south of the field.

Over the town of Front Royal, the lift became disorganized above 6,400 feet MSL. It felt like very mild rotor and the clouds to the east were slightly torn: they looked a little different than the usual cumulus but were not obvious rotor clouds or lennies. After what seemed like an eternity, I caught some strong lift that carried me up into the wave at about 7,500 feet. The lift was about 4-5 knots at its strongest and perfectly smooth, though I'm certain I could have done a better job of staying in that lift band. I used Route 340 as my ground reference and tried to make S-turns at minimum sink airspeed to stay in position. I wanted to break 12,000 feet, but my flight logger recorded a peak of 11,950 feet MSL, the highest I've been solo. From my low point, it was an unassisted altitude gain of about 9,300 feet.

The temperature at altitude was pleasantly cool while it was over 100°F in the shade on the airport ramp. After running out of drinking water, I pushed the Cirrus over to 90 knots and went sightseeing for a bit. There were places where I was climbing even at that airspeed (the Cirrus polar falls off a cliff above 75 knots) and I could have stayed aloft for hours longer. The visibility was not great at about 7 miles due to haze and smoke from the nearby forest fires. I landed with a flight time of 3:23, a personal best.

I saw no evidence of the derecho that was to rip through the area a few hours later. I guess the strong winds aloft needed to create mountain wave also pushed that system along. Flight operations were cancelled yesterday and today because power is still out at the airport and there is no way to open the hangar doors. 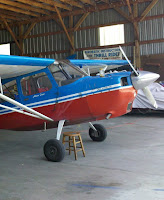 I've also been flying aerobatics as often as possible, my sole source of airplane time right now. I am still terrible! It is humbling trying to stay inside the aerobatic box while attempting to fly the Primary sequence. But the training is definitely improving my stick-and-rudder skills, and the lesson is always the highlight of my week. My goal is to compete in the local IAC chapter's contest in September. I'll get there...
Posted by Paul No comments: