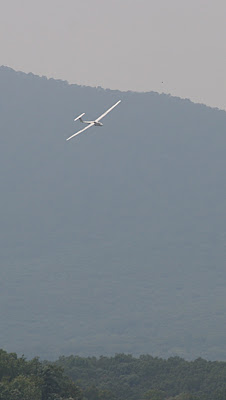 The airport was a convenient stop along the way to my Labor Day camping trip; what better way to break up the drive than by flying for a few hours? With scud obscuring the ridge, operations got off to a late start.

I took off in the ASK-21 with a solid tailwind blowing. I hadn't flown the "K" from the front seat since my checkride over a month ago. I popped off tow at around 2,000 feet over the ground to keep a comfortable distance from the clouds and went hunting for the weak thermal we passed through 30 seconds earlier. Finally settling for a not-quite-zero sink rate, I orbited as long as I could to allow the Pawnee to take off.

The windsock indicated that the wind had picked up, though the 1-26 was in the pattern to land in the grass beside runway 28.  He was safely down when I made my downwind entry for runway 10. I intended to carry a few extra knots of airspeed, surf the length of the 3,000 foot runway in ground effect, then stop on the piano keys so that the glider could be pushed off and turned around quickly.

Not so fast, Slick: the ship ballooned, partly due to a wind gust and mostly due to my ham-handedness with the spoilers. I recovered--held pitch attitude, careful not to PIO--but bounced on touchdown. And we're flying again. I set it down easy, but after all of that, there wasn't enough energy left to roll to the end of the runway. Meanwhile, the tow plane was entering the pattern, so I had to push the glider into the grass and suffer the indignity of a tow back. By far my worst landing in months, it was ugly but thankfully not rough on the glider.
Posted by Paul No comments: