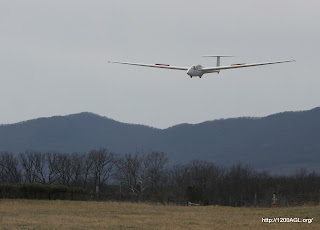 This past 7 days has been full of personal flying firsts. Today, I joined a local soaring club and took my first two dual glider flights.


I decided that I will pursue a glider rating as the next goal. After making two flights in a glider, I am convinced that the training will sharpen my stick-and-rudder skills. Glider flying is a lot of fun, too.

Having never flown in a sailplane before, I was struck by a few things:
I had a difficult time keeping the glider coordinated in turns, and I definitely overcontrolled it. Keeping in position behind the tow plane was a challenge and the instructor repeatedly had to make corrections (definitely don't want to make the tow pilot's job harder). While flying around on a search for thermals, I sensed the glider slowing down and noticed the airspeed near the top of the green arc. So I instinctively pitched into a shallow dive, and the airspeed built very quickly. This prompted a correction from the instructor. He then demonstrated a stall to show that I was nowhere near stalling, and the glider was very docile through the stall.
Posted by Paul