I logged some solo time this morning to practice no-flap landings, forward slips, and ground reference maneuvers. It was bit dreary due to the overcast, but I was happy for the light winds that came along with it as I can't fly solo in anything over 10 knots by my school's rules: 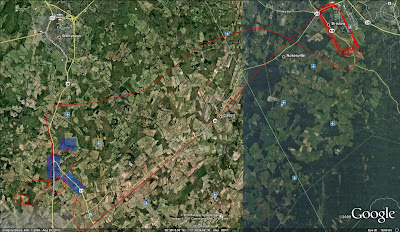 I headed back to HEF and attempted a no-flap approach on runway 16R.  I had never done these in calm winds or during the daytime before. As advised, I tried to hold my normal approach speed of 65 KIAS. I really noticed the missing drag that the flaps provide: if I pitched down to adjust the airspeed, the clean airplane accelerated quickly.  As a result I was a little fast. Without the helpful drag of the flaps, the airplane floated considerably. This gave the crosswind time to work. I am much better at holding the runway centerline on the approach using a sideslip now, but I still have to consciously fight the urge to land with the wings level rather than on one wheel. I made that mistake today, and had struggled to re-establish the correction right before touchdown.  Consequently, I landed well to the right of the centerline and made the A4 turn off.  Good thing I wasn't being graded on that one.

The next no-flap approach was high and I went around.  Next attempt, I used a forward slip but I released it a bit too early and floated it down the runway. The remaining landings were soft- and short-field maneuvers, and I still was fighting the compulsion to land wings-level.

I used the soft-field technique for all of the takeoffs today.  With less-than-full fuel tanks and just me in the airplane, it was shocking how quickly the C-172P picked it's mains up off the runway. I was also surprised how much control force was needed to hold it in ground effect.

So I have a few things to make sure that I don't repeat during the stage check later this week, but I'm confident that I'll do a better job this time.