On Wednesday, 29 December, I made several mistakes on my final stage check, so the short version is that I'm not taking the checkride for awhile. It probably didn't help matters that I hadn't flown in 10 days (not for lack of trying), but that is no excuse. I now have almost 53 hours in the airplane, I've completed all of the FAA requirements except for the practical test, and I feel comfortable flying, even solo. I can fly the practical test maneuvers within the specified limits, but evidently not when it matters: when I'm being graded on them. I can't explain how frustrating this is.

The flight didn't start on a good note. I was to make a soft-field takeoff. I had been warned not to let the plane try to climb out of ground effect before accelerating to Vx during a soft field takeoff--the chief flight instructor mentioned to even use the trim wheel to reduce the amount of forward pressure required to keep it from trying to climb.  I had made that mistake before, and I was not going to let it happen under any circumstances.  I overcompensated while leveling out after the wheels left the runway and actually bounced on takeoff--that was a first.  There was far too much thinking going on prior to that maneuver. 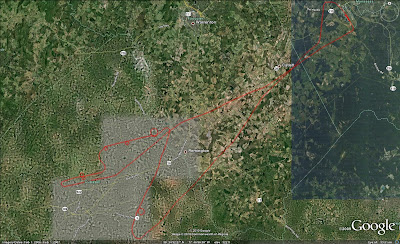 All instructors have their own way that they want things done, and the examiner will surely be no different in that respect. The Cessna 172 has a high wing, so you really can't see well above you.  Before turning, you lift up the wing to make sure there is no traffic that you might otherwise turn into.  I usually pick it up a few degrees, look underneath, and move on.  The CFI that I flew with wanted that look to occur with what I'd estimate to be a 20-25 degree bank.  Now that's no problem, and he may have been exaggerating the bank angle to illustrate his point, but it was just one more thing that I had to consciously think about every time I turned during the flight. I foolishly let little stuff like that throw me off and then allowed the mistakes to compound. My problem is, admittedly, a basic lack of skill and proficiency.

I don't have the proficiency (yet) to adapt and improvise the maneuvers on the fly; When I am asked to perform them differently than my normal routine, I have to think about it and invariably screw up. For example, I usually fly the slow-flight maneuver at minimum controllable airspeed (MCA). The pitch attitude is high and the plane seems to hang on the prop while the stall horn blares the whole time.  But on Wednesday, I was asked to fly it at 50-55 knots indicated airspeed.  My usual entry tactic of cutting power, raising the nose to hold altitude and slow down, pausing, then adding flaps didn't work at that speed: the airplane ballooned. It was sloppy.

Another example:  I was directed to fly steep turns back-to-back, where a 360 degree turn with 45 degree bank to the left is executed followed by an immediate roll into a 360 turn to the right.  I hadn't ever done them back-to-back, and I contemplated the transition too much. As a result, I was way off on my exit heading.

The CFI that I flew with could not have been a nicer guy and certainly wasn't out to rattle my cage. If I couldn't get this flight done with him then I don't stand a chance with the examiner. In the debrief, he made the observation that I can't treat the maneuvers like a sequence of discrete steps: they need to be one fluid operation or I am already behind the airplane.  Unfortunately when I need to perform them even slightly differently than I have practiced, my mind does exactly that--breaks them up into steps--and the result is predictably poor.

So I'm back to the drawing board. Part of me thinks that I just need more practice and that I should go work on the maneuvers solo until I can confidently handle any possible contingency. If I haven't managed to learn the correct way to do them by now, then I'm not sure that my instructor can help me.

P.S. Rereading this post, I can't help but notice that it contains far too much whiny drivel. To put things in perspective, there is no such thing as a bad day if you've gotten to go flying. I consider myself very fortunate to be able to take this training, and I've come a long way since I started. While my performance is not yet where it needs to be, I am sure as hell not giving up.