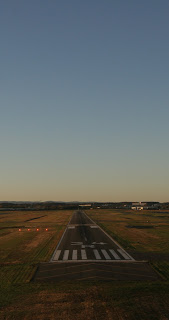 I was greeted with this TAF this morning on my cellphone as I struggled to wake up and get out of bed:


I had Dulles Tower playing in the background while I made my morning coffee and I heard the controller call out the winds to a Learjet that had just been cleared for takeoff on runway 30: the gusts were already in the high twenties.  Dulles is the closest airport to HEF that has a terminal forecast and a feed on Live ATC. The conditions at Manassas and Warrenton were markedly calmer than Dulles, though:
I've seen this pattern with strong northwest winds aloft and light winds on the field before, and it usually means there will be some wind shear-like stuff to ride through near the tree line during takeoff and final approach on runway 34L.

I called my instructor at about 6:45am to run down my analysis of the weather to reduce the chance of making a trip out to the airport only to cancel: there is really no ground work left for me to do and CFIs don't get paid for their gas/time if they have to drive out for a canceled lesson. Admittedly, I don't mind making the trip to the airport even if I can't go flying--I'd be content to just sit there and watch airplanes takeoff and land all day long. He gives me the usual "You're pilot-in-command, so what to you want to do?" I said that I probably wouldn't launch solo in this, yet, due to the turbulence AIRMET and incongruous winds, but that I'd like to fly to push my comfort level landing in this stuff; we would remain in the traffic pattern rather than practicing maneuvers as originally planned.

During the flight, the surface winds steadily picked up, but stayed below the 30 knot forecast:
As was expected, we were tossed around a bit in the traffic pattern. It was wild to watch the ground speed accelerate when I made the downwind turn as the crosswind became a ~40 knot tailwind. For the downwind leg, I held the tach at the bottom of the green arc, a little more than 2000 RPM, to keep the ground speed down. 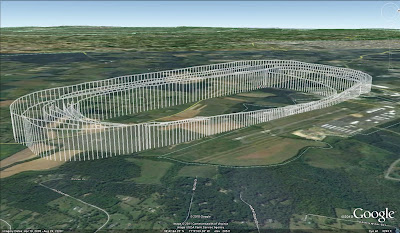 I made a conscious effort to hold the runway centerline during the approaches and make aggressive corrections on short final. Most of the time the right answer is to make gentle control inputs and the airplane happily complies. Right before touchdown, when the airplane is slow and the flight controls are mushy, is one notable exception: you sometimes must make quick, extreme changes to aileron and rudder to avoid landing with a side load on the gear or with the nose cockeyed when hit with a gust. It helped me to think to myself--my CFI would think I was crazy if I actually said it--"alright airplane, I'm not taking any more sh*t from you. You are going to land on the centerline and point straight down the runway."

In contrast to last week's spectacularly lousy display of airmanship, I was relaxed and relatively happy with my performance today, though there were a few issues (there always are):


After an especially crummy week at work, I am so grateful to have gotten my flying fix today. One way or another, I will pass this checkride.
Flight time this lesson: 1.2 hrs dual
Total time to date: 54.0 hrs total, 42.5 hrs dual, 11.5 hrs Solo/PIC
Posted by Paul