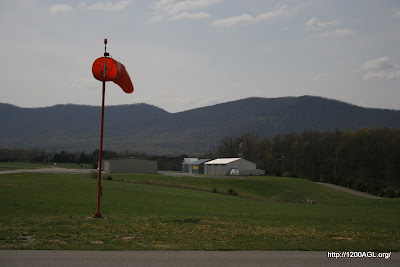 The ceiling was too low on Saturday, 9 April, to support glider operations, though I did get to sit in on the ground portion of another pilot's flight review, which was a good overview of relevant procedures and regulations. Sunday didn't look much better, and I had about an hour of ground instruction while waiting for the clouds to rise. Fortunately, they did, and I got a great training day in.

I let the nose oscillate a bit flying 60-degree banked turns at 70 knots. In the single-engine airplane practical test standards, a bank of only 45 degrees is considered "steep," and I noticed that it took a conscious effort keep rolling through to 60-degrees. I took a final, fourth, flight with another instructor and made an effort to roll into the turns with a crisper entry; the result wasn't pretty. I've got to practice that.

The boxing the wake maneuver had me working harder than a three-legged dog: I was over-controlling the glider and predictably overshot the corners. This maneuver is currently my nemesis.

On Friday, 15 April, I managed to get in a new personal best of 6 instructional flights. It was a beautiful day. Though the thermals were working, it didn't matter much to me. My focus was boxing the wake, and once off of the tow, I'd descend in a full-spoiler steep spiral and then practice slips on the final approach. I had one wake boxing episode that almost met the pre-solo standard. The rest of the nearly ten attempts were awful. 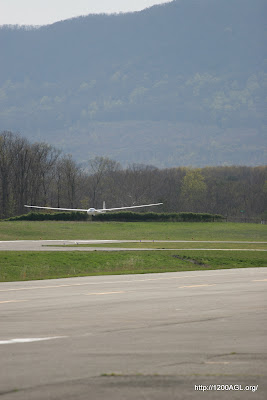 My slips were an issue as well. That is surprising to me, because I learned to love doing them in the Cessna 172, and I've done them successfully in the glider on final approach before. My base-to-final turning slip was wide and it took some doing to get back onto the extended runway centerline. When slipping with flaps deployed 30-degrees in a C172, I was taught to keep the nose well below the horizon to prevent any elevator oscillation. That isn't necessary in the glider, but I have a hard time fighting the tendency to lower the nose. At one point on short final, the instructor informed me that the airspeed was almost 80 knots while I was holding the slip and 1/4 air brakes extended in a dive bomb approach. It is a good thing those air brakes are so effective at bleeding off excess airspeed! In an airplane, that would be a recipe for floating the entire length of the runway.

Finally, I had the opportunity to execute a simulated rope break at 300 feet above the ground. I tightened up in anticipation, but in the end, it was really no big deal. The instructor covered my altimeter so that I wouldn't be tempted to look at it. As we were climbing out, sure enough, he released the tow rope. I turned right, 180 degrees, and pulled full spoilers. I landed downwind with a solid 10 knot tailwind. My CFI had me keep the glider rolling down the runway. After awhile, the glider began to head toward the left edge of the runway despite my adding full right rudder. I had lost all rudder authority with the wind on our tail, effectively driving home the concept that a relatively high groundspeed does not necessarily mean that the control surfaces will be effective. My instructor pulled the wheel brake just as this lesson was permeating my thick skull.
Posted by Paul