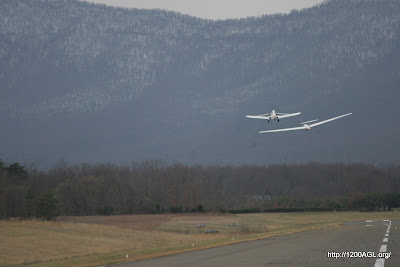 Fortunately the weather was flyable on Sunday, 27 March. I hopped in my car and headed to the field shortly after receiving the email nod from the duty officer that flight operations were on. There wasn't much lift to be found--my longest flight of the day was just 17 minutes--but the conditions were good for training.

I flew with a different instructor this lesson. The club CFIs rotate through and, usually, a different instructor is assigned each flying day. I will have the opportunity to fly with a lot of different instructors while working toward this rating. So far they have been very experienced aviators that clearly love soaring and passing that knowledge on; I can't think of any other reason that would motivate someone to volunteer to sit in the back of a glider all day long--and these are long days--all the while being tortured by students at the controls. Each instructor has a slightly different way of doing things, and each has recognized different deficiencies in my technique, which is great because I can't fix what I don't know I'm doing wrong.

During these three training flights, I made the takeoffs, approaches, and landings with coaching. Prior to this lesson, I had just followed along on the controls during takeoff and landing. I'm starting to get the hang of flying behind the tow plane in calm conditions, though it will be a little while before I can successfully "box the wake:" fly a rectangular pattern while on tow. The instructor's guidance to use half as much stick input as I thought I needed was right on.
﻿
﻿
I practiced a few medium bank turns, trying get the feel of staying coordinated while maintaining airspeed and keeping a proper scan going.

When entering the traffic pattern, I got hung up on making position announcements on the radio while also struggling to get the right amount of spoiler dialed in (first time using the air brakes). The instructor told me to "Aviate. Aviate. Aviate," making it clear that my top priority was flying the airplane rather than fussing with the radio. That really helped, as I was task saturated flying the pattern in what was still a rather unfamiliar bird.

My approaches were passable: on centerline and on a reasonable glidepath. Each time, though, I tried to start the round-out too high. That is a carryover from flying the Cessna 172, and I'll get the sight picture of the glider down with practice.

I enjoyed this lesson, and I believe that the control feel of the glider has finally clicked.
Posted by Paul