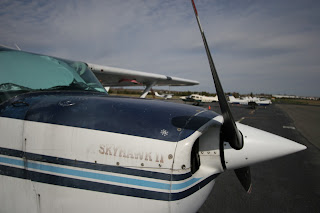 After getting some practice landing the glider and learning the sight picture, I wanted to make sure that I could still land a Cessna 172. So I scheduled an hour in my favorite C172P last Tuesday, 29 March, to bash around the traffic pattern at KHEF.

I managed to get 4 takeoffs and landings in before the pattern started to get busy and the wind picked up. I called it a day at 0.7 hours on the Hobbs, as I am trying to keep proficient and current while being parsimonious with my remaining flying funds.

I tried to watch my pitch attitude during the flare in an attempt to make soft, full-stall landings.  No joy on the first try: the flat, 3-point touchdown resulted in a bounce with nary a peep from the stall horn during the subsequent recovery and landing.

The AWOS was out of service, but it was pretty clear that the wind was beginning to pick up and get a bit gusty. I heard the tower report that it was 13 knots at one point. Prior to this announcement, I tried another landing with full flaps. The 172 felt like a kite in the gusts and the airplane got picked up during the round out. I dropped that one in from a few inches after recovering from the gust. No stall horn.

I made the third and fourth approaches with 10 degrees of flaps due to the wind. Touchdown happened before the stall horn in both cases. I need to be patient in the flare and progressively haul back more on that elevator to hold it off. At least the approaches were on speed, on glidepath, and on centerline. I'll try again soon on another nice weekday morning.
Posted by Paul