Today I participated in the annual inspections of the club's two-place gliders. We removed the seat pans and inspection panels, vacuumed out all the cruft that had accumulated over the past year, and otherwise prepared the birds for the A&P/IA's inspection.


I was happy to get a look at how sailplanes are put together. It was comforting to see that the flight control linkages are composed of very stout and reliable pushrods. Now I know that capacity flasks really exist--I counted three of them in the Grob--and are not just figments of the Glider Flying Handbook's imagination. Though I know nothing about aeronautical engineering, I found the overall design of the ASK-21 to be extremely well thought out. For example, the holes in the seat pan allow the safety belt buckles to just barely fit through, making disassembly easier than it otherwise would have been.
These gliders are simple compared to powered airplanes, and simple is a virtue: the actual inspection process took only a few hours. After a tailwheel tire replacement on one and an air brake adjustment on the other, both gliders were back in service and flying this afternoon.

My tiny contribution to the project was unskilled labor. Aside from asking lots of questions and just generally pitching in, I removed the petrified residue of old gap seal tape from the control surfaces and wing roots with liberal application of Goo Gone and elbow grease. I was told that this tape actually reduces the stall speed of the glider by 2-3 knots. 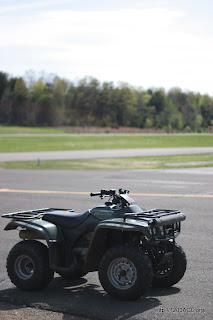 The conditions were deemed too sporty for any flight training, but I did get briefed on proper operation of the club four-wheeler. Fun. I managed to tow a glider and a trailer using without damaging anything. The glider towing requires more practice, because the natural speeds of this thing are both too slow and too fast for wing running, and my throttle pulse width modulation technique is a bit rough right now.
Posted by Paul

Email ThisBlogThis!Share to TwitterShare to FacebookShare to Pinterest
Labels: glider