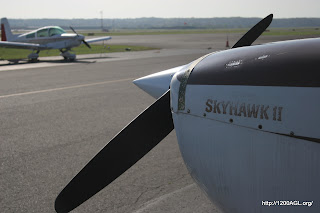 After it became clear that I wasn't going to be needed to work on Thursday 14 April 2011, I took a look at the weather forecast and quickly scheduled one of the Cessna 172P's for a two-hour block. The online scheduling system showed lots of reservations, which was unusual for Thursdays when I was training over the winter. Lots of people either had the same idea--it promised to be the nicest day in the past week--or the fair weather pilots are beginning to emerge from hibernation. Either way, it is great to see more folks out flying.
I promised myself that I will stay current and proficient flying single-engine aircraft while working on my glider rating. I hadn't flown a Cessna 172 in 3 weeks, and I was surprised at how much my skills had atrophied in so little time. I took off from HEF and flew straight to Culpeper (CJR). The takeoff rotation required more back pressure than I had anticipated; the airplane felt a bit foreign compared to the gliders I'm slowly getting accustomed to flying.
I got a bit tongue-tied during my initial radio call on Culpeper's CTAF. More rust to knock off. Good thing it was early in the morning and unlikely that too many people were listening down there.  I crossed over the runway at midfield at 2,000 feet then maneuvered for a 45 degree entry to the downwind leg for Runway 4. I noticed how much maneuvering had to be done to set up for the 45 degree entry. After reading this article in the January 2011 issue of AOPA Pilot Magazine, I am beginning to think that it would have been safer and quicker to just turn onto the downwind leg after crossing at midfield.
I decided to make a touch and go at Culpeper. My school taught me how to properly perform touch and go's, but solo students were not allowed to do them because they can be potentially dangerous, especially in complex airplanes, because a lot is happening while the aircraft is moving down the runway. A Cessna 172 isn't a complex aircraft, but it doesn't climb well if one forgets to retract the flaps. Culpeper has a 5,000 foot runway and the wind was calm, so I decided that if anything was abnormal with the landing, I would make a full stop (or go around) rather than executing a touch and go.
My goal for the morning was to hold a proper pitch attitude during the landing flare and make full stall touchdowns. The first landing fell short of that goal: I touched down flat, too soon, and the airplane decided to go flying again. After a proper recovery, I chalked the poor execution up to accumulated rust.  At least I was on the centerline, my final approach airspeed was dead on, and the bounce was a small, gentle one.
I headed to Warrenton Airport (KHWY) for another touch and go. The landing was much better, but the stall horn didn't sound before touchdown. I need to keep hauling back on that elevator and hold it off longer. I firewalled the throttle, pushed in the carb heat, and the airplane picked itself off the runway almost immediately. I still had the flaps extended to 30 degrees. Doh! I carefully held the pitch attitude and retracted the flaps, allowing the airplane to accelerate before attempting to climb. That sure got my attention, though I had plenty of runway to land again and stop if I needed to. I'll never make that mistake again. The Private Pilot Certificate is called a "license to learn" for a reason.
I flew back to Manassas and made a soft landing, but again, the airplane touched down before the stall horn screamed. I also caught myself straying a bit off the yellow taxiway turnoff line as I exited the runway. This was perfectly safe, as I rejoined it before reaching the hold-short line, but it is sloppy airmanship. I want to be in the habit of always operating to a high standard even though there is no instructor in the right seat barking at me.
Flight time today: 0.9 hours
Posted by Paul

Email ThisBlogThis!Share to TwitterShare to FacebookShare to Pinterest
Labels: practice