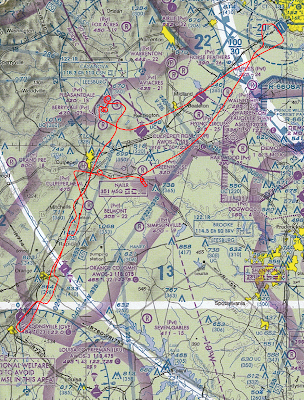 On Thursday morning, 2 December 2010, I went up with my CFI to practice maneuvers.  The highlight of the flight was landing at Gordonsville Municipal Airport (KGVE): it was a real confidence boost to execute a short field landing on a short field, rather than simulating it on the 3,700 foot runway at HEF. Taking into account the displaced threshold at Gordonsville, there is 1,860 usable feet of rough asphalt available on runway 23 for landing.  The runway is 40 feet wide, the narrowest I've attempted so far. Surprisingly, I had no problems. I chopped the throttle after clearing the imaginary 50 foot obstacle at the threshold and landed with plenty of room to stop.  This was also the first time I had back-taxied on a runway--all the airports I've landed at so far have had taxiways.  Now if only the school's insurance company would allow me to practice landing on a real grass field...

We did slow flight, stalls, steep turns, a simulated emergency landing on a grass strip, and ground reference maneuvers.  I had done the ground reference (S-turns and turns about a point) a couple of times back in the summer.  No major issues there--I think they were within the minimum standards.  So we head back home, and I botched the landing.  I had wanted to practice a forward slip, but I had already added 20 degrees of flap and the headwind made it unnecessary.  This was to be a soft-field landing so I was focused on keeping the nose wheel off and adding power right before touchdown.  Whenever I concentrate intently on one thing, it distracts me from others: my lazy feet let go of the rudder right before touchdown, allowing a bit of a side load on the landing gear.  Not pretty.  The conclusion was that I need one more practice flight before the last stage check  No argument there.