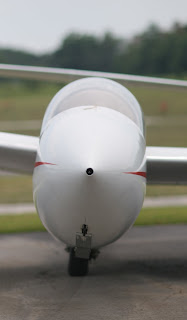 One year ago today, 15 July 2010, I took a demo flight in a Cessna 172, my first time sitting in the pilot's seat of an aircraft. I earned my private pilot/airplane rating in March and started working on my glider rating immediately thereafter. My Google Docs logbook/spreadsheet says that I've accumulated 123.7 total hours so far, 26.9 of which have been spent flying sailplanes.

Today I practiced for my upcoming glider checkride. I made one flight in the K-21 beneath a broken cirrus ceiling. There was no lift, but the smooth air was ideal for working on the PTS maneuvers.

Later on, the winds aloft whipped up and south/southeast surface winds made for squirrelly takeoffs, sporty aerotows, and turbulent trips around the traffic pattern. My first takeoff in the 1-36 today was so bad that it rattled me: after releasing from tow, I just wanted to get the glider back on the ground rather than working the thermals.
I got back on the horse by making the put-away flight in the 1-36. The tow was pretty rough. We plowed through a patch of 2,000+ fpm lift (according to the Pawnee's VSI; the glider's vario was pegged off the scale) and sink of similar magnitude. The crab angle in the traffic pattern was the largest I've needed so far, and I compensated for the tailwind on the base leg with an especially steep turn to final. A sink hole caused by wind shear was waiting for me on short final for runway 10. The landing was OK. I'll admit that this paragraph is far more melodramatic than it needs to be.
There was more airplane traffic than usual at the airport today due to a Civil Air Patrol event. Cadets were taking short flights to CJR and back. It was cool to see a bunch of kids actually commit aviation. They were put to work cleaning windows in the FBO and picking up trash while waiting for their orientation flights.
It was a productive day. I even got some more practice by "helping" (read: slowing down the works) to assemble and disassemble the Cirrus, which I hope get checked out in once I have the club's requisite minimum number of PIC glider flights logged.
Posted by Paul