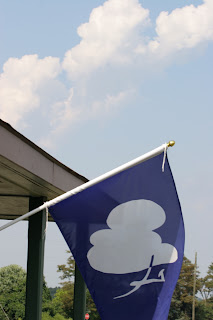 I flew four consecutive days, July 1-4, in order to start practicing for my upcoming glider rating checkride. On Friday, July 1st, I managed a 104 minute flight in the 1-36 Sprite, which was good enough for my SSA "B" badge. A club member was waiting for the glider and I didn't want to be rude, so I opened the dive brakes at 3,500 feet AGL to get the ship back on the ground quickly.

I found decent thermals on Saturday afternoon during a solo flight in the club's Grob 103. I wound up with an hour-and-13-minute flight, climbing to 4,700 feet AGL while attempting to fly triangle courses around the airport. These numbers are really nothing to be proud of, but I'm content to take one small step at a time. The lift seemed to shut down on me so I beat upwind back to the airport. Near the initial pattern entry point, I joined a gaggle with a couple of gliders in a "house" thermal. The distances still seemed too close to me--I'm still getting acclimated to flying in close proximity to other gliders--so after a few turns, I decided to land.

A beautiful Luscombe and a Navion payed a visit to the airport on Saturday afternoon: 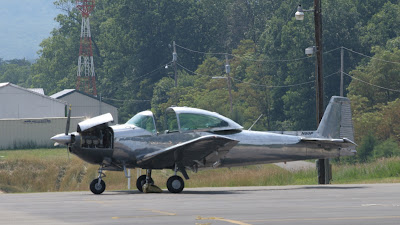 On July 4th, I flew a mock checkride with one of the club instructors. He captured it on video with his Contour HD camera and posted the result:

It kills me to hear my own voice in the video. There are plenty of mistakes there, though it was helpful--if a bit painful--to analyze them after the fact. I overdid the "mushing into the trees" patter: there were landable, though obstacle-ridden, fields off to the right. My box-the-wake maneuver was poorly done. I should have executed a clearing turn prior to the forward slip manuever at altitude. And my grass landing was way too hot (55 knots) and shallow. Now I slow the glider down to the book minimum approach speed (49 knots) or a few knots slower on short final for spot landings, and the sailplane stops in much less space with little float.
Posted by Paul