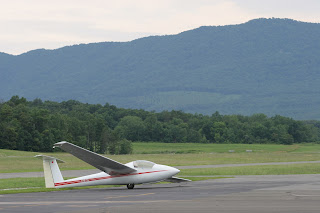 I had my best solo flight to date yesterday, 27 June: 49 minutes in the SGS 1-36 Sprite. I released from tow at the customary 3,700 feet above sea level (3,000 feet above the ground) and climbed to 5,600 ft. MSL thanks to a few thermals north of the airfield. This was the first time I've encountered well-defined thermals while flying solo. Those numbers are hardly worth mentioning--the duration isn't quite good enough for even the "B" badge--but it felt great: the air was comfortably cool above 5,000 feet and the vario's consistent staccato beeping--indicating lift--was a welcomed change from the last month-or-so of flight attempts. For the first time, I was able to sit back while circling in a 35-degree bank beneath the shade of a dark-bottomed Cu and just take in the view. Despite my appalling lift-hunting skills, I am utterly and completely hooked. This is flying, pure and simple, as written on our club T-shirts.

For the second weekend in a row, I flew Friday, Saturday, and Sunday. The conditions on Friday were the sportiest I've flown in so far. The instructor gave me a verbal OK that I could continue to fly solo in the Sprite. Rough tows are part of the bargain for good soaring conditions. The experience was worth it, and I'm glad that I kept flying even though I wasn't skilled enough to effectively use the small, disassociated bubbles of lift very well. One pilot told me that the strong wind was shredding the thermals. Another said that they got into some weak mountain wave lift at about the same time that I was flying.
The winds aloft were from the southwest. Above the ridge we hit very strong, but narrow, pockets of sink and lift which alternately pegged the variometer needle down and up. It was a struggle to anticipate the shocks and keep in position behind the tow plane. A few times, I'd be in lift and the Pawnee would be in sink, and it was all I could do to keep the rope taught and not climb above the tow plane. I'd yaw the glider's nose away to serve as a shock absorber, but there were a few shock loads toward the end of the tow. Fortunately the rope didn't break.
I have 24 days until my checkride and plenty of things to work on. I took a check-flight with one of the club CFI's on Sunday and he pointed out a few deficiencies:
He said that he saw no reason why I couldn't be ready for the practical test at the end of July. I want to earn the "B" and "C" badges before then, though.
Posted by Paul