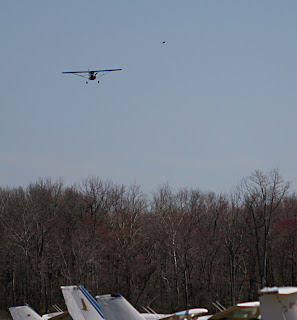 After several botched attempts, the Immelmann seemed to make sense to me. Enter a little faster than the loop and maintain a steady pull until reaching an inverted slow-flight attitude. Push a bit to stop the loop, unload the wings, then apply full left aileron to get it rolling.

Sounds simple, but it went off the rails on the first few attempts: I'd keep some forward elevator in when initiating the roll, then overcompensate (to be really sure the wings were unloaded) and gracelessly whip the stick over to ensure full aileron extension. After a few more tries, I'd roll out upright in a slow-flight attitude at slightly under 60 mph indicated.

I had an epiphany flying the slow roll: I needed to scoop the nose up higher and push a little more over the top. Once I got the pitch attitude high enough, I was able to perform a few passable examples. It will click next lesson. And the half cuban is close. I predict that it will click next time, too.

That was hour 3 of aerobatic training. It is clear that I over-think the maneuvers. My flying skill, already in short supply, approaches zero when I consciously think through the control inputs. I'll get there, though. This training has been the most fun I've had in an airplane by far. I'm grateful that the instructor is so patient.

The landing was better than the last, but I had a tiny bit of a side load at touchdown. I need to be more aggressive in making adjustments to the sideslip as the crosswind changes.

Next lesson: the Hammerhead.

Nothing written on this blog should be considered training or advice. Do not attempt to teach yourself aerobatics. Find a competent instructor and an aircraft suitably stressed for the task.
Posted by Paul