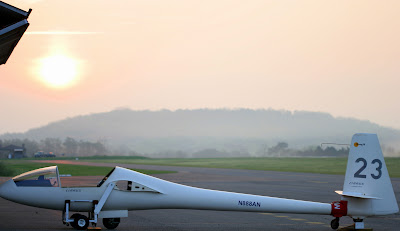 I got to the airport extra early on Friday to assemble the Cirrus. The wings must be aligned just right before the wing spar pin--the only thing that holds the wings together--will slide into place. That usually requires a few rounds of adjustment to the wing dolly followed by pushing and pulling on the wing roots, all while uttering gentle persuasions. I've heard the assembly process compared to foreplay; I guess I can see a vague similarity there.

Elapsed time from opening the hangar door to finishing taping the wings was about 35 minutes, my fastest single-handed assembly to date. With practice, I'll get that (safely) down to 15-20 minutes like the grizzled vets in the club. I still managed to get white lithium grease on my clothes despite taking extra care. So it goes.

I took her up for a sled ride after some of the morning haze had burned off. My takeoff was better than the prior two, but I still found myself hunting in pitch while the Cirrus accelerated in ground effect on tow. I will get smoother with practice. I flew a slightly lower and tighter pattern for landing, but it required full dive brakes from the base leg all the way to touchdown. I'm going to try flying at roughly 600 feet AGL abeam the touchdown point next time; that should permit a tight, half-spoiler approach in this ship.

The Grob 103 was available, so I took that up in the afternoon. I hadn't flown it since last summer, and I really noticed how much easier it is to fly the takeoff and tow in that heavy trainer compared to the Cirrus and the 1-36 that I usually rent. The lift was mostly to the south and east of the airport, near Linden VOR and over the city of Front Royal. A slowly moving rain cell appeared to the southwest. The sight of distant shafts of rain from an aerial vantage point is always impressive. I circled around until getting called down to help on the ground  and got a decent 50 minute flight out of the deal.

I'm glad I went flying on Friday. Glider operations were cancelled Saturday and today due to weather. My aerobatics lesson was cancelled as well.
Posted by Paul