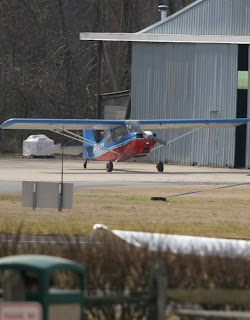 I'm surprised the instructor didn't get sick during Sunday's lesson with all of the side slipping that went on while I tried to get the inverted-to-knife-edge part of the slow roll down. I'd feed in way too much top rudder then release some of the aileron in the process. And my timing was way off. He said he'd get a good blast of cold air during those moments to add to the tail wagging. He sits behind the center of gravity, so that feeling caused by poor coordination is more pronounced. I felt a touch nauseous once we were back on the ground, no doubt due to that ham-handed display of airmanship.

Though I am currently butchering the maneuvers, it is so much fun. I look forward to each lesson all week long. The instructor is awesome. If everyone had the opportunity to fly aerobatics, there would be no drug problem in this country.

And it isn't all bad: my loops were more round with mostly the right amount float over the top. I need to start getting the elevator back in a bit quicker on the way down, though. I felt more accustomed to the strange attitudes this time. Yeah, that last half of the slow roll needs work, but I'm going to chair fly them this week and it will click next time.

I learned the half cuban eight, which is 5/8 of a loop followed by a half roll from inverted on a 45 degree down line. This maneuver teaches proper recovery from a nose-low inverted attitude. The roll on the line requires more subtle elevator input than the level slow roll and just a slight bit of rudder. Smooth and subtle on the controls, I am not; I'd put in way too much of both and not enough aileron. I need to focus more on the visual reference to hold the line rather than thinking about what I should be doing. It will click next lesson. I'll get it.

I'm not going to describe the landing. Not my best.
Posted by Paul