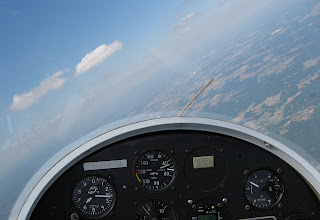 Friday, 12 August, was a great soaring day. The thermals started working at around 1pm, and I launched in the 1-36 shortly thereafter. I could smell the smoke in the cockpit from the forest fire burning between the ridges just south of Signal Knob. Strong thermals quickly lifted me up to a little over six thousand feet MSL, and then I went off exploring, making it as far east as the edge of Front Royal, then over Linden VOR where an airliner passed overhead. Since I don't yet have my Bronze badge, I'm not permitted to stray out of gliding distance from the airport. That's fine for now.

I took my Camelbak along for the first time, threading the straps of the glider's safety harness through the shoulder straps of the Camelbak so that it sat across my lap. That worked well; I was happy to have water during the 2 hour and 50 minute flight. 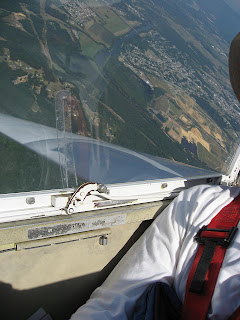 The thermals were everywhere and I had a hard time descending without spoilers. It was strange to be climbing at 5 knots with the nose pushed over to 75-80 knots in the Sprite. I feel like my tolerance to riding through turbulence in that light ship has increased.

The barometric pressure had changed enough during my flight that I discovered my altimeter was reading 100 feet higher than actual. This was pretty obvious in the traffic pattern.