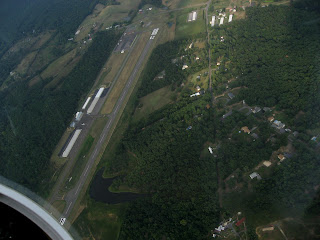 With hurricane Irene threatening to disrupt weekend plans, the club had a healthy quorum of Friday flyers. I was happy to get some stick time as the storm remnants canceled my first tailwheel transition lesson in the Super D this morning.

The early afternoon lift was cut up and challenging to work. Cloud bases were fairly low at around 4,000 feet. Some days you have to work for every foot of altitude. I'm beginning to love that about soaring: nothing is guaranteed, and you don't know for sure what you're going to get until you're in it. My first flight in the SGS 1-36 was only 26 minutes.
After a re-light, I eeked out a 1 hour and 9 minute flight. Less than 30 seconds before I'd need to break off to land, I found some weak lift and scratched back up. The altimeter appeared frozen for several minutes, then it slowly began to wind up. Once at an altitude where it was safe to leave the weak lift, I headed off and eventually felt the welcome jolt of a 3 knot thermal. Later, I witnessed a student's first solo flight take place below me. I briefly shared a thermal with the hottest ship in the club, an ASW-27. I'm still hesitant to fly in gaggles, and I can't help but focus more on the relative position of the other glider than my position in the lift. I eventually fell out and landed on the pavement of runway 10.
I took the opportunity to make the put-away flight for the Sprite (it is easier to fly it back to the hangar than to tow it). There was a huge dark-bottomed cloud west of the airport. I released from tow at 2,500 feet in good lift. I began to feel guilty about not doing my part to help put the gear away, so I spiralled down and landed after 47 minutes.
Posted by Paul