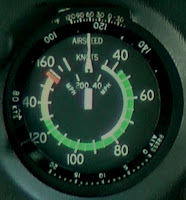 I rescheduled Flight lesson #5 for this afternoon.  The weather was gorgeous: winds at 3000 and 6000 feet were light and variable.  The lowest cloud layer was scattered at 5600 feet, well above the usual 3000 ft altitude for stall manuevers.

I started the takeoff roll on runway 16R and noticed that our airspeed was indicating zero.  My CFI made the decision to abort the takeoff and we turned off at A-3, which is at about the midpoint of the runway. There was plenty of pavement ahead of us--no risk of an overrun.  The tower called to ask if we needed assistance: nope, just an inoperative airspeed indicator.

Insects or some creature may have climbed into the pitot tube, blocking it and rendering the airspeed indicator useless.  As I was filing my flight plan, I heard that this happened to another student earlier in the day in the Cessna 172 that I usually fly, though I had scheduled  a different C172 today. As I was leaving, they told me that it also happened to a third pilot. Very strange.

I was lucky enough to have aborted the takeoff, since at this point in my training I'd have a hard time making a safe landing with no airspeed indicator--I'm sure that my CFI would have taken over if we had gotten airborne.  Also, my school's policy is that I am not charged for the Hobbs time if the aircraft doesn't take off due to a maintenance issue.  This is a good safety-oriented practice, and I have so far been impressed with the professionalism of my school.

It was good experience, so I am not too bummed that I couldn't fly today.  I'll be interested to hear what happened to all three airplanes.
Posted by Paul