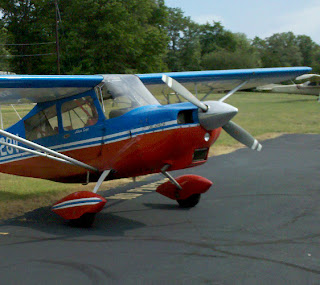 My spreadsheet shows that I had exactly 199.9 hours of total time after finishing my aerobatics lesson this morning. The unseasonably pleasant weather and developing cumulus clouds convinced me to neglect my household chores and drive straight from VKX to FRR to fly gliders, because who wouldn't want to fly both airplanes and sailplanes in the same day? That drive takes about an hour and a half with no traffic. No problem. Counting this afternoon's soaring adventure, I've now broken two hundred hours total time. Five years ago, I would never have believed I'd be a licensed certificated pilot.

I seem to need to repeatedly learn the secret to not botching maneuvers: just fly; don't think. I flew a passable primary sequence (that's not me in that video) that I mostly kept within the confines of the aerobatic box (1,000 meters^2 may sound large, but it goes by surprisingly quickly during downwind figures). Just entering the box at the correct airspeed and beginning the first figure in the right location is difficult for me. My instructor showed me this cool Google Maps application that overlays an aerobatic box on Google's imagery. We used it to study the ground references that we use in the practice area.

The contest is only a few weeks away and I have a lot of things to work on. The roll on the 45-degree downline in the 1/2 cuban eight is my nemesis. For some inexplicable reason, I just don't want to keep the wing unloaded during that particular roll. And I tend to pull too soon so that the line segment after the roll is too short. Though I actually stopped a few of my one-turn spins on heading today, my spin entries need work. I had been feeding in rudder too early and yawing off a few degrees before the stall rather than crisply falling straight into the spin. That will result in a downgrade if the judges see it (and they will). I believe I have corrected that mistake. Next issue: make the downwind loop more round. And make a good landing.

Once I got to Front Royal, I assembled the club's Open Cirrus, waited for my turn in the tow queue, and launched a bit before 4 pm. We hit a booming thermal on tow at 1500 feet AGL. I saw the towplane zoom above me. Wait for it. About two seconds later, I felt the jolt of lift and rapidly climbed to meet the Pawnee. With a 58 foot wingspan, the Cirrus can really climb. And it kept climbing in the lift as the Pawnee left the thermal. The Cirrus is also slippery, so nosing it over just results in a slack line. I kicked rudder to yaw out, creating drag, but it didn't help quickly enough. Still climbing. So I pulled the release. Cracking the spoilers would have helped descend to a normal tow position, but if done hamfistedly, it can easily result in a broken towrope. I never lost sight of the towplane, but I was uncomfortable with the very high tow position. I spoke to the towpilot afterward, and he said he didn't even notice, so it actually wasn't that bad.

I had enough altitude to make the airport and fly a normal traffic pattern, so after clearing the towplane, I backtracked for the thermal. I left the landing gear down so that I could break off to land immediately if I couldn't get established in lift. Fortunately, I found the thermal and rode it straight to almost 6,000 feet MSL.
Posted by Paul