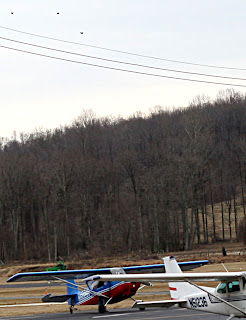 The snow never appeared in the Washington, D.C. area. It was a perfect morning to begin learning aerobatics in spite of earlier forecasts. This was the most fun I've had so far at the controls of an aircraft, and I didn't even need the Sic Sacs that I brought along (just in case). I had the good fortune to experience some aerobatics last year, though save for a few aileron rolls, this is the first time I've attempted to fly the maneuvers.

We briefed the flight and went over the bailout procedure, of which I was familiar after watching Allen Silver's bailout webinar a few weeks ago. Clear of the FRZ and class B airspace, we climbed up over the Potomac River to attempt a few loops.

Loops were fun, though mine weren't particularly round: as the airplane passes through a vertical attitude, one needs to gradually unload the wing so it floats over the top of the loop at less than 1g, then gradually load it back up until the best cornering acceleration (3.5g in this airplane) is reached again. The fabric rumbles distinctively at the top if you get this right. If it really rumbles, you're going to fall out of the top of the loop. I've got to work on that timing.

Then I tried a few aileron rolls: pitch up, unload the wing, then fully deflect the aileron. At first, I neglected to release all of the back pressure before beginning to roll. And though I thought I'd reached full deflection, I still had some aileron left and needed to push harder.

Afterwards, I rolled to inverted and practiced level inverted flight. It was an odd sensation hanging in the straps and pushing to hold the nose-high pitch attitude necessary to maintain level flight. My feet weren't cooperating on the roll from inverted to upright and later the complete roll. I need to work on harmonizing the elevator and rudder, especially when passing through the knife edge. I'm going to chair fly it over the next couple weeks and try again as we work on the primary roll and then the slow roll.

While on final for runway 6 at VKX, I was informed that a friend from my glider club would be observing my landing. So I proceeded to balloon the round out and needed some power to recover. This meant that I touched down at midfield: not a problem in the Super D but not a great demonstration of my newly-acquired tailwheel skills. It never fails when there is an audience watching.

As with anything else you find on this blog, none of this dreck should be considered advice or instruction. Find a competent instructor and an airplane properly stressed for aerobatics. Don't try to teach yourself.
Posted by Paul