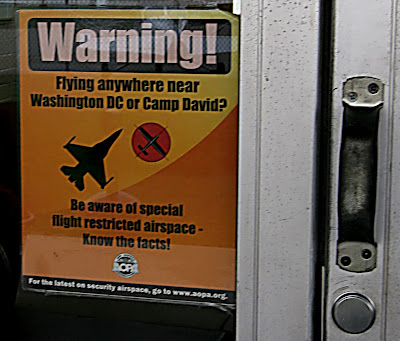 Last weekend, I had planned to fly from Gaithersburg, MD (KGAI) to Boulder, CO (KBDU) in a Cessna 182E. This would have been my longest cross-country trip to date at 1,300 nautical miles. The owner is a flight instructor (CFII) and the trip would have given me some experience flying in actual instrument conditions. I would have earned a high-performance endorsement as well. Mechanical issues and weather forced us to revise our plan and, ultimately, to cancel the flight; Chief Niwot's curse be damned.

I started my public transportation journey early Saturday morning using bus, metro, and taxi to get to Montgomery County Airpark in time to meet the airplane, which was enroute from Boston. Unfortunately, the airplane's transponder failed in flight. Potomac Approach could not allow it to enter the Washington D.C. Special Flight Rules Area in which GAI resides without receiving a secondary radar return from the airplane. The owner was forced to land in Frederick, MD (KFDK), outside this airspace.

The transponder problem was caused by the antenna departing the airplane. By the time that was sorted out, a cold front was bearing down on the area. The clouds on the back side of the front were low and full of ice. A low freezing level and cloud tops in the flight levels made it unsafe to attempt to cross it.

The trip gave me the impetus to start studying the Instrument Flying Handbook and learn more about weather flying, especially icing. I had never been to Montgomery County Airpark before, and I was happy to see a traffic pattern 3 and 4 deep with general aviation airplanes (at least until the scheduled TFR centered near Towson, MD went into effect). The wait also gave me a chance to get some pancakes at the restaurant on field.