A flight over the beach, practice emergency approaches 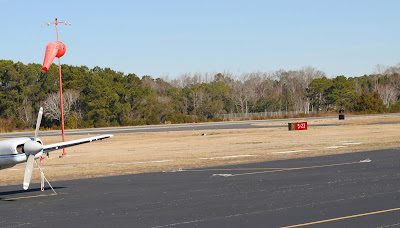 After two cancelled flights due to weather, I went up today to practice some emergency approaches. It was a beautiful day: good visibility, clear skies, and the ever-present wind along the coast to keep me honest.

My lesson last Friday was done in by scud at 800 feet and reduced visibility (dipped briefly to 3 miles). An earlier forecast for nearby KILM included ice pellets (sleet), but thankfully that didn't happen. Strong wind and turbulence was cause for cancellation yesterday: the surface wind was forecast 20 gusting 30 knots and 40+ knots above 1500 ft. The AWOS reported peak gusts of about 20 knots almost straight down the runway at the beginning of my timeslot, so it looked like it could be a go, but this pilot report from a King Air 350 at Wilmington tipped the balance toward scrubbing the flight:

My instructor said the reported wind shear and moderate turbulence from 100 feet to 2000 feet would ensure that the lesson would turn into a keeping-the-wings-level exercise. I believe him, because it was only 11 gusting 18 knots at the surface during takeoff today and the climb out was a little bit squirrelly:

We flew westbound along the beach to Williamson 60J. The view was incredible--I could see out to Myrtle Beach. I overflew the field at about 2000 feet to get a look at the windsock (no AWOS/ASOS). There was almost a direct crosswind. I made an engine-out approach to runway 6, but this was misjudged and resulted in a go-around.

Then I made several attempts at a field a few miles northwest of the airport. I'd repeatedly set up on the downwind 180 degrees from the touchdown point, but I'd the airplane would get too close to the field because I had not properly corrected for the strong wind.  With a 20 degree bank, I overshot the field laterally several times--something the DPE would hammer me for--but I think would have made the field if I completed the landing. It is hard to tell, though, because we had to break off the approach by 500 feet AGL. A lot happens in that last 500 feet.

There were lots of fires visible out to the west. The smoke looked like it stopped rising at an altitude above us. I assume that was a temperature inversion, but I had never associated winds like we were flying in beneath an inversion layer. My CFI said the fires were set by loggers burning off unused brush. I had no idea that there was logging in this area. He pointed out a few freshly cut fields and explained that these would obviously be poor choices for a forced landing due to the stumps that would become visible when close to the ground.

I flew back to KSUT about 1/2 mile over the ocean, which was another great vista, and made an emergency approach on the base leg to runway 5. We made it to a full stop, though I was a tad high and called out that I'd do a forward slip. The instructor asked me "Can you do a slip with flaps extended?" I replied, "Sure," but then it occurred to me that slips with flaps are prohibited in some Cessna 172 vintages (damn lawyers), but not the ones that I had flown up to this point. I second guessed that call and scanned the panel for a placard to that effect, didn't see one, but nixed the slip. The mains touched down around the 1000' marker.

I made lots of mistakes (as usual):
Today's performance made it clear that I am not at all ready to take my checkride re-test.