On Saturday, November 20, I flew Lesson 23 from the Jeppesen syllabus.  This was a dual review flight to work on executing the maneuvers to better than PTS minimums in preparation for the checkride. 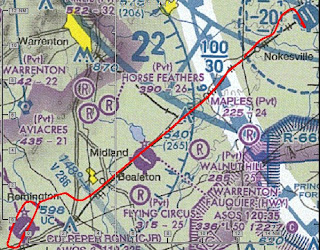 It was a beautiful morning, and they had put the airplane in the hangar overnight so that it would be easy to start.  During preflight, I got a slug of water in the bottom of the fuel tester from the fuel strainer drain.  This was a first, and now I know what water will look like in the tester.  After a couple more refills of the fuel tester, it was clear of water.  The engine ran really rough for the first few minutes, but eventually smoothed out.

I executed a soft-field takeoff that was not bad--I'm over with not pushing the nose down enough when in ground-effect.  We flew out around the greenhouse and I executed a simulated engine-out landing on a grass strip next to it (we aborted the landing at about 500 feet AGL).  I definitely had the field made, but I probably added flaps too soon.

Next was slow flight.  I forgot to do my clearing turn first: that would have busted the checkride.  After the clearing turn, I slowed the airplane to minimum controllable airspeed with the stall horn blaring the entire time.  I think this was within PTS, but it is definitely something I want to keep practicing.  Then power-on stalls.  These were passable, but I still took forever to induce the stall break.  Power-off stalls were OK.

Steep turns caused me some trouble.  I was over-controlling. There was definitely some rust to knock off, since I hadn't done one of these in over a month.

We flew to Culpeper and I tried to forward slip in to runway 4 on final.  I was a little high, so I decided to go-around instead of landing long.  On the next circuit, I briefly let the nosewheel touch on my soft-field landing.  I did another soft-field takeoff and flew back to HEF.

If I can get my act together, I have a few more review flights before attempting the final test to be signed-off for the checkride.  I had my CFI renew my 90-day solo endorsement so that I could get more practice in, if needed. My goal is to get the checkride knocked out before New Years.