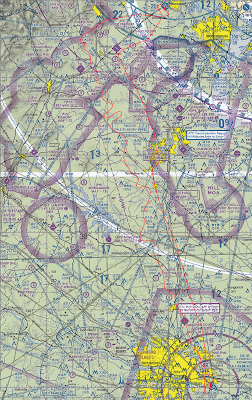 On Friday evening, 15 October 2010, I flew from Manassas (KHEF) to Richmond International Airport (KRIC) and back. There were lots of lessons learned from this flight.  Next time I will:

This flight was good experience.  It was cool to fly in Class C airspace where my movements were controlled much more closely.  The tower said at one point "VFR descent approved" to allow us to descend to traffic pattern altitude (TPA) from our cruise altitude.  I didn't know that I needed permission in Class C airspace.  Also, when requesting a temporary frequency change to call Flight Service,  the tower gave a time limit of 10 miles to get back on her frequency.  I also enjoyed trying to navigate the labyrinth on taxiways using the signage alone, which was interesting to do at night.
Posted by Paul